At visiting places, Mr. Dang Hong Sy informed local people outstanding socioeconomic achievements of the whole province in 2020 and in the first quarter of 2021, as well as the province’s preparation for the upcoming election of deputies to the National Assembly and people’s councils at all levels in the 2021-2026 tenure. He highly appreciated and acknowledged the contributions of the Cham dignitaries to each locality’s socio-economic development and the whole province over the past time.

On the occasion of the traditional festival of the Cham Bani community, Mr. Dang Hong Sy wished them a joyful and cozy Ramuwan celebration. He also encouraged the Cham Bani people to keep on production in association with Covid-19 prevention in order to ensure stable life social order, contributing to fulfilling targets of socioeconomic development in 2021. Mr. Sy asked the Cham dignitaries and the whole Cham people to actively attend the national election as they perform their freedom and democratic rights.

Representatives of Cham dignitaries in the two localities sent deep thankfulness to the province’s leaders’ care for the Cham community on their Ramuwan festival. They vowed that they will continue mobilizing local residents to promote patriotic tradition, unite and actively engage in emulative movements in the localities, and well implement the Party’s guidelines and the State’s policies and laws. 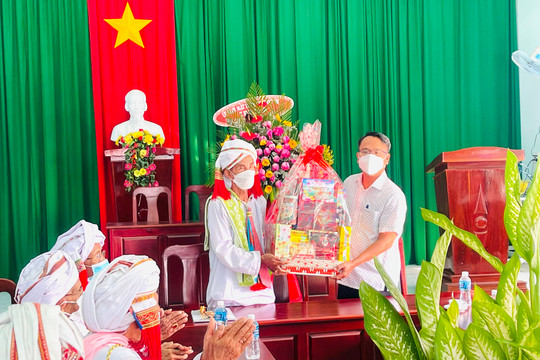