President Nguyen Xuan Phuc has affirmed that Vietnam always treasures its comprehensive strategic partnership with Russia and wants to foster bilateral ties in all areas for benefits of both nations.

During his talks with Russian President Vladimir Putin in Moscow on November 30, President Phuc conveyed regards and best wishes of Party General Secretary Nguyen Phu Trong and other Vietnamese Party and State leaders to the Russian President.

President Putin, for his part, affirmed that Russia always considers Vietnam its leading strategic partner in the region.

The two leaders discussed and agreed on important directions and measures to open up a new cooperation period of the Vietnam – Russia comprehensive strategic partnership with a vision to 2030.

They also debated regional and global issues of shared concern, as well as bilateral coordination in the international arena to contribute to common peace, stability and prosperity.

Sharing the view that Vietnam – Russia political and diplomatic ties have a high level of strategic trust with the regular maintenance of meetings at all levels within both bilateral and multilateral frameworks despite the COVID-19 pandemic, they agreed to increase the exchange of delegations via the Party, State, Government and National Assembly channels as well as locality-to-locality and people-to-people exchanges once the pandemic is controlled.

The leaders said national defence-security cooperation has reaped important achievements and deepened reliable political relations between the two countries. They affirmed their determination to turn economic cooperation into an important pillar of the Vietnam- Russia relationship.

The leaders welcomed and vowed to facilitate bilateral collaboration in the supply of liquefied natural gas, thermal and gas-fuelled power and renewable energy while stepping up the construction of a nuclear science and technology research centre in Vietnam, considering it one of the major projects between Vietnam and Russia in the near future.

They spoke highly of the substantial, effective and comprehensive cooperation between Vietnam and Russia across traditional and potential fields of education-training, science-technology, culture, tourism, and information technology.

The two Presidents showed support of stronger relations between localities, friendship organisations and people, thus contributing to enriching the Vietnam-Russia cooperation; and agreed to reopen direct air services between the two countries immediately after the pandemic is brought under control in a bid to restore exchanges between people of the countries.

They highly valued the bilateral cooperation in COVID-19 prevention and control over the recent past, including the sharing of face masks, medical supplies and vaccine.

Exchanging views on international and regional issues, President Phuc appreciated Russia’s role as a world power and increasing prestige in the region, affirming that Vietnam stands ready to serve as a bridge linking Russia with ASEAN nations and other countries in Asia-Pacific.

They also discussed collaboration in maintaining peace and stability and ensuring security, safety, freedom of maritime and aviation in Asia-Pacific, particularly in the East Sea/South China Sea, in accordance with international law, including the 1982 UNCLOS.

The Vietnamese President took the occasion to thank his Russian counterpart and Russian administrations at all levels for creating favourable conditions for Vietnamese citizens studying and living in the European nation, especially ensuring health care for them amid the spread of COVID-19.

At the end of the talks, the two State leaders issued a joint vision statement on the Vietnam-Russia comprehensive strategic partnership until 2030, which orientates the countries’ trustful cooperation in all fields in a more practical and efficient manner, meeting the long-time interests of both countries and nations while contributing to peace, security and sustainable development in the region and the world.

Following the talks, President Putin hosted a banquet for the Vietnamese President. President Phuc invited his Russian counterpart to visit Vietnam again, and the latter accepted the invitation with pleasure. 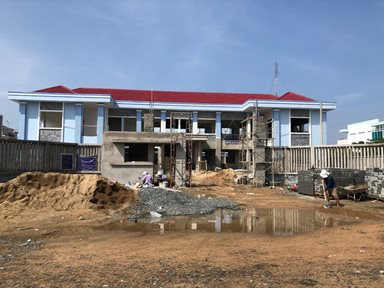